Our Lovely Tibetan Terrier Lily and our Chickens

We have the most gorgeous little Tibetan Terrier called Lily. We have had her since she was 8 weeks old and she has completely ruled our lives ever since! She was so tiny when she arrived and got used to being picked up and cuddled right from a very young age. Consequently she still loves to be picked up and cuddled! 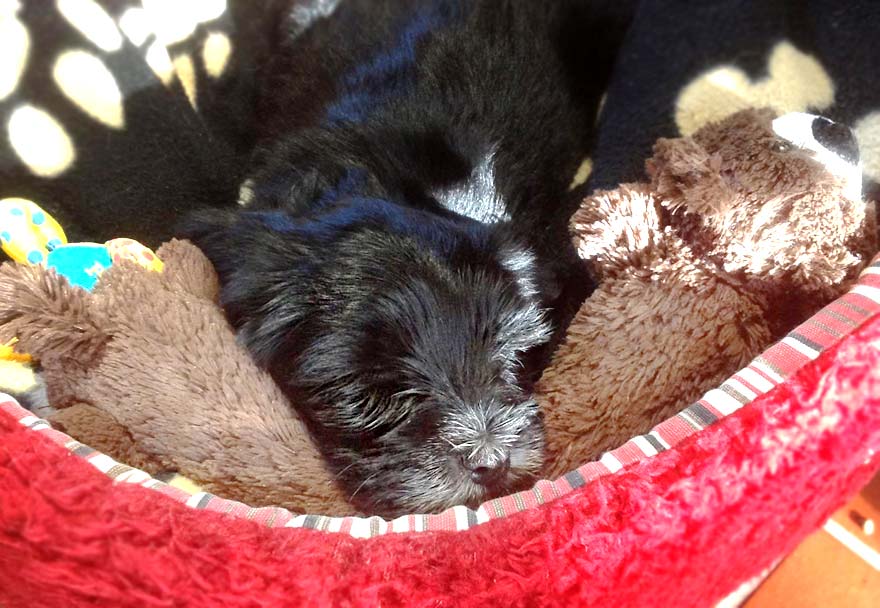 There is a little bit of a story behind her being with us. When our previous dog Tom passed away, thoughts of feeling guilty for the love of another dog so soon played on my mind. We continue our daily walks and reminisced about Tom and how he loved rambling with us through the countryside. As the months passed however it felt more and more strange not to have a dog by our side. We left the cottage one day on our usual walk and I suddenly exclaimed to Nicholas, it's time for a puppy! I want a little girl puppy this time and I want to call her Lily. I don’t really know where that came from, I hadn’t really thought about what I would name a dog, but it stuck in my mind.

We initially looked on our local rescue sites to see if we could find a puppy or a young dog that we could rescue, just like we had done with Tom. Unfortunately over the weeks, even looking every day, there just wasn’t a dog suitable for us. During that time we looked after our friends Tibetan terrier called Coco for a week while they went on holiday. It suddenly dawned on us that we love the breed, so what about looking for a Tibetan Terrier puppy. 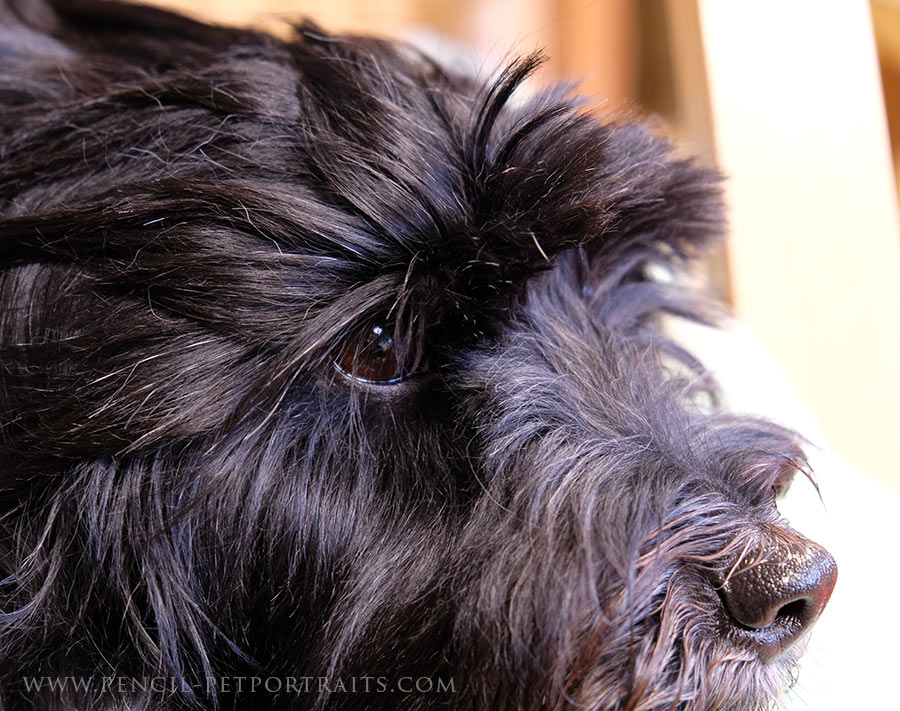 Searching online on a reputable website, we found a lovely lady called Linda who's Tibetan Terrier had recently had puppies. How exciting! I emailed via the website and Linda sent a message straight back saying that she had two boys and one girl left and would we like to come and visit? Yes! So we headed off to meet them.

It was lovely as the dogs were in their family home (not breeding kennels!) and they had been raised in their open plan kitchen and dining room so were socialised with family and friends, including Linda’s grandchildren. We sat down and she let the puppies out - they had all just had their first bath for our arrival! They were everywhere! Running around playing, jumping, rolling over, play fighting...a quick nap snoozing and then off again to play.

At this point I was a little in shock, I didn’t even say anything as I felt I must have miss heard. I turned to Nicholas and mouthed, did she say Lily??! ......Yes! That was it! It was a sign. Emotions were high, I think we had decided within seconds she was 'our' puppy. It was meant to be. After four very long weeks of waiting, we travelled to collect Lily and she came home with us. 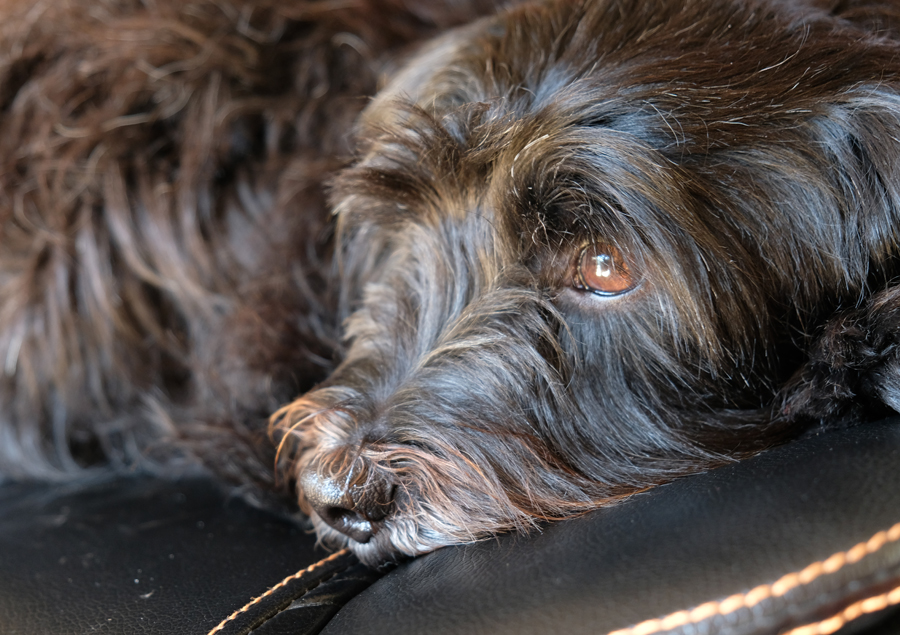 Anyone who has owned a Tibetan Terrier or experience of the breed will know they are affectionately known as 'the little people'. They have so much character, they are extremely clever and persuasive along with being very loyal and loving. Both Nicholas and I work from home so she is here in the studio with us every day and take her wherever we go. Tibetan Terriers love snow. Having said that snow does tend to stick to their fur and countless times I have 'defrosted' her in the kitchen sink and dried her, only to find she wants to go out and play in it again! 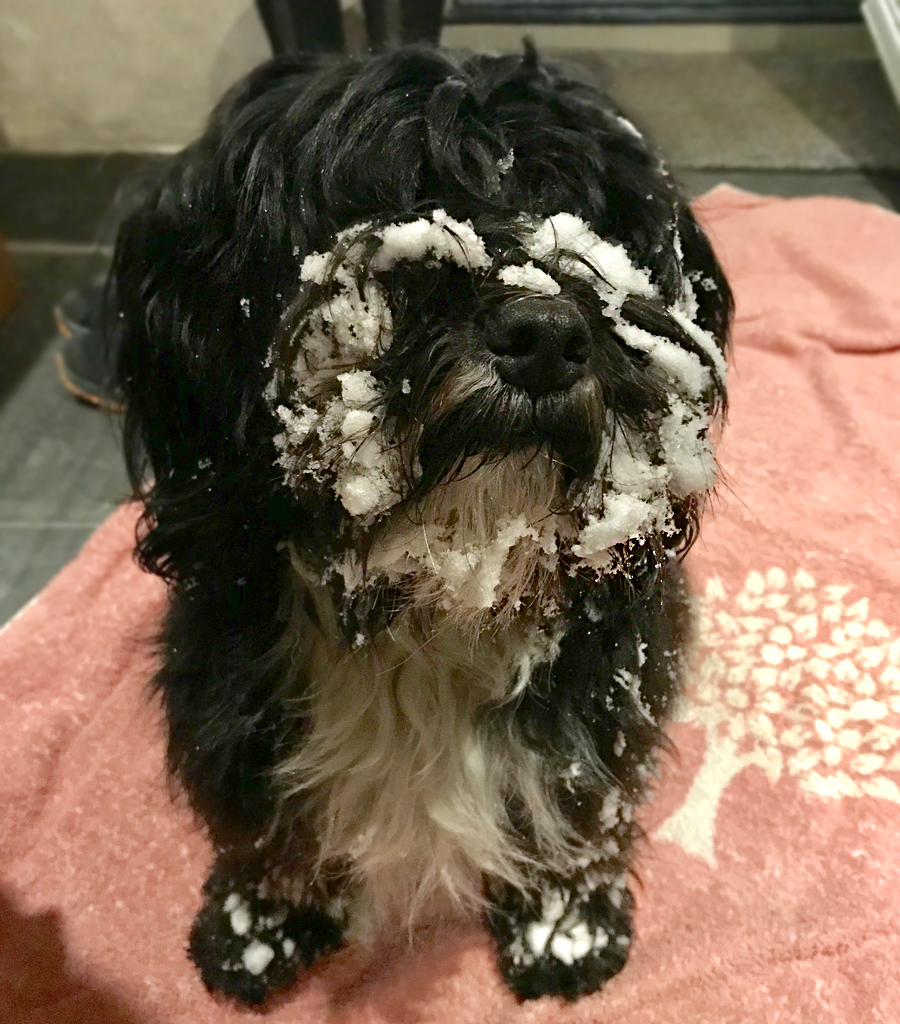 The photo below was taken at Mwnt beach. She is sporting her onsie! Tibetan Terriers have a double coat and don’t shed, which is a huge plus. However her coat takes a long time to brush, wash and dry so the onise helps to keep the sand off as much as possible. She goes to the groomer every 8 weeks where she thins her coat out a little and keeps her coat at a good level for me to maintain. If she didn’t go to the groomers, she would revert to her natural coat length where the fur would reach the floor. It is a lot of work to keep it like that and so we opt for a mid length cut. 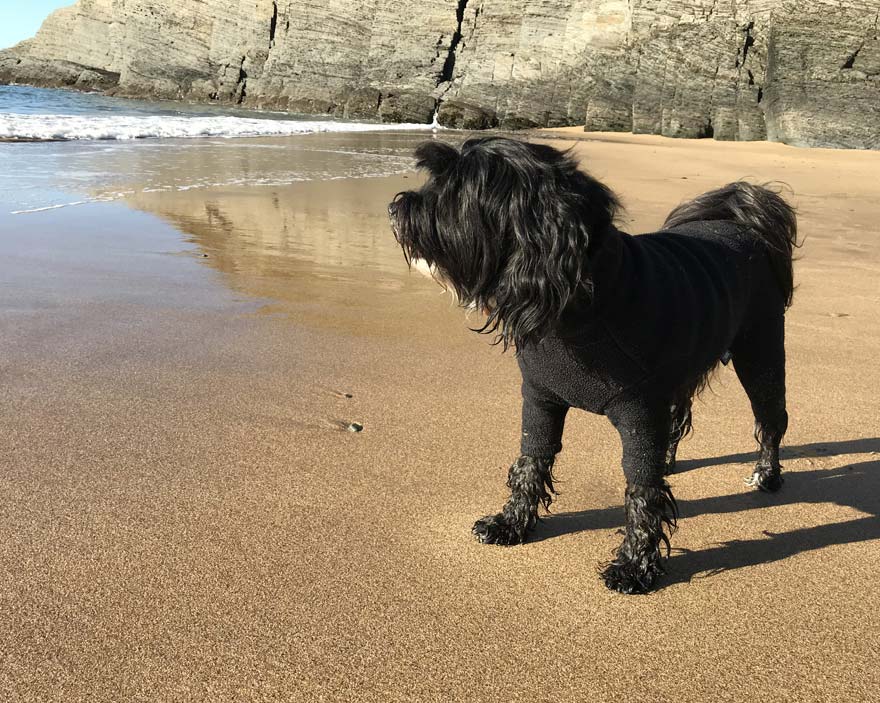 This photo was taken in the studio. She loves being in on everything and this photo was taken when I was in the middle of wrapping foam wrap around a framed painting. She decided that it looked like a comfy place to sleep...so she did! 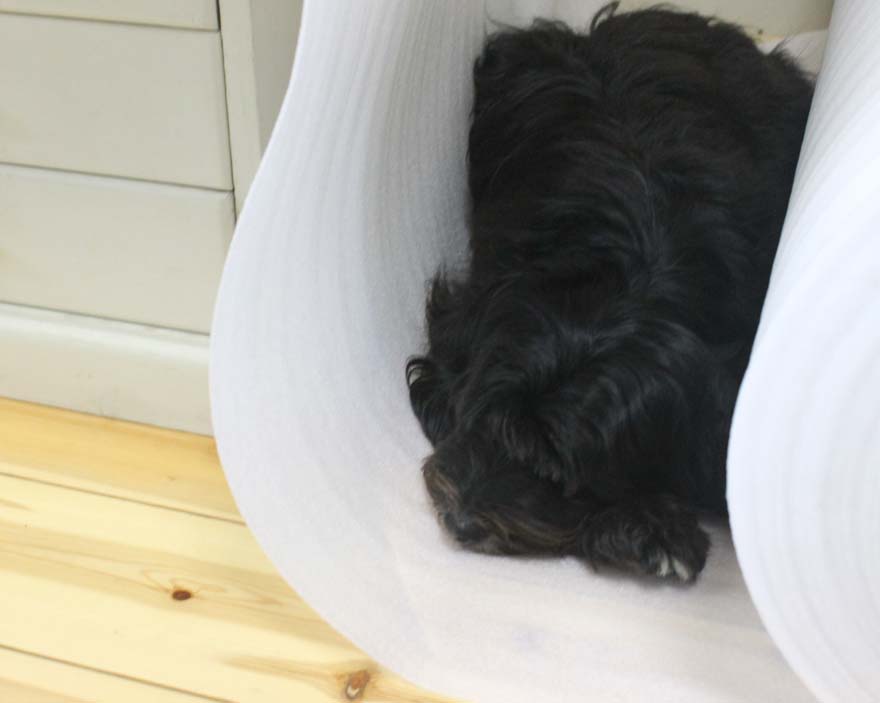 In between taking Lily to the groomers, I bath her a few times. This was taken after her bath and was just a quick snap taken just as she had been pulled out of the bath. It has become one of my personal favourite photos of her. 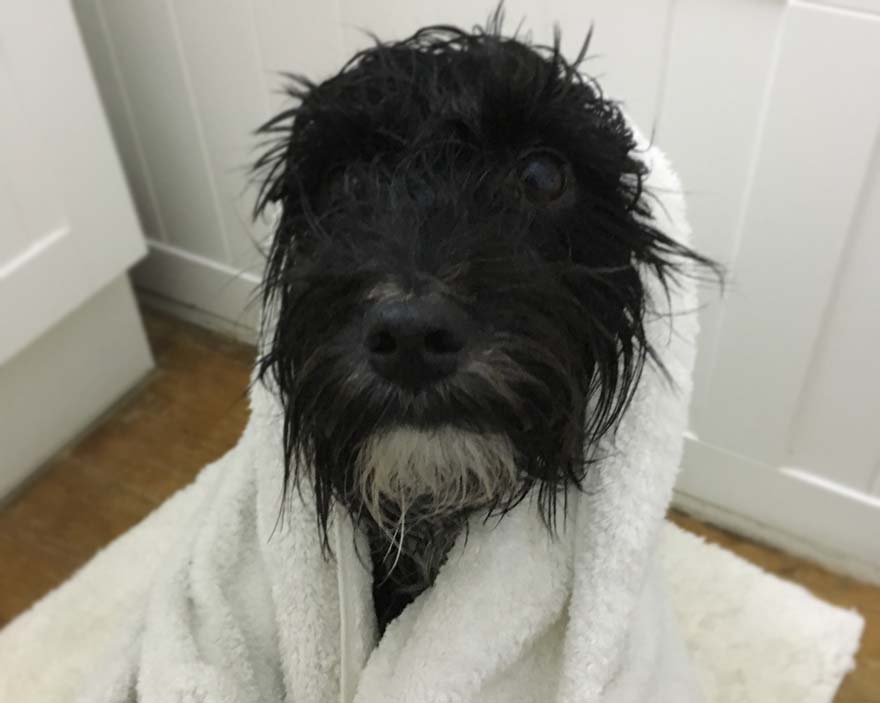 Lily and I used to go to dog training locally and the dog club we attended taught obedience. We passed a number of tests including the bronze and silver and gold Kennel Club Good Citizens tests. Below is a very tired lily just after her Gold test. 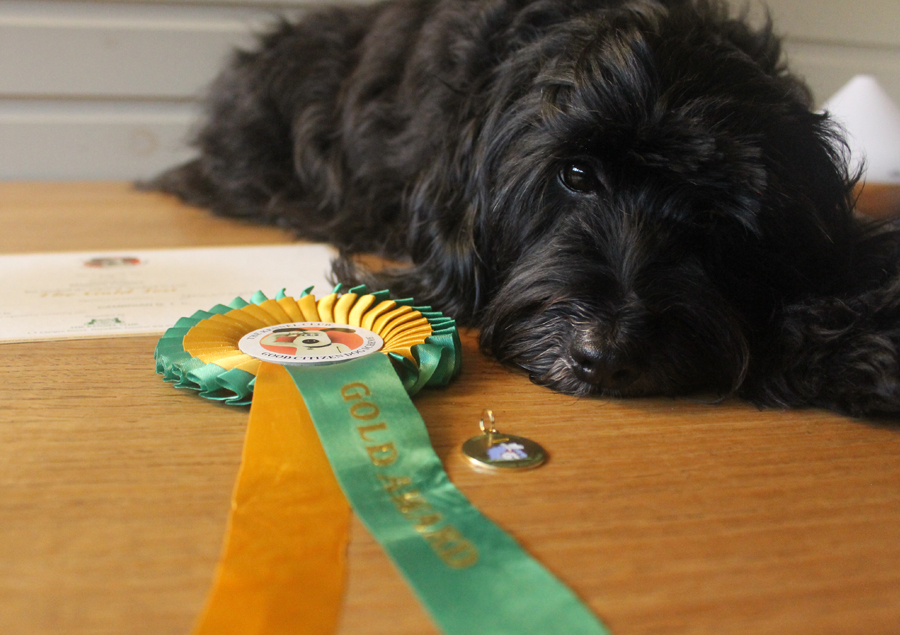 The photo below shows Lily looking out of the window...her favourite occupation! 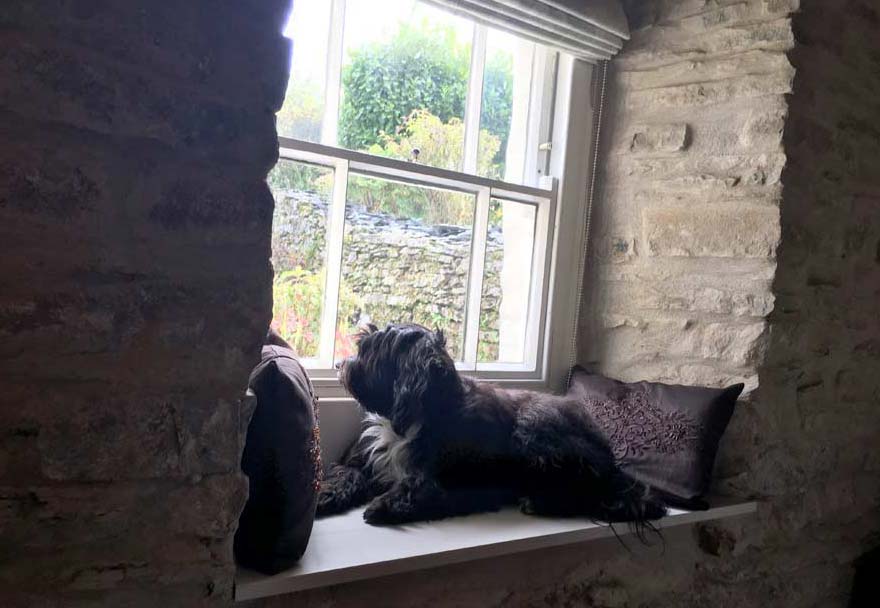 Finally one of Lily on our lane walk in 2020 in the sunshine! 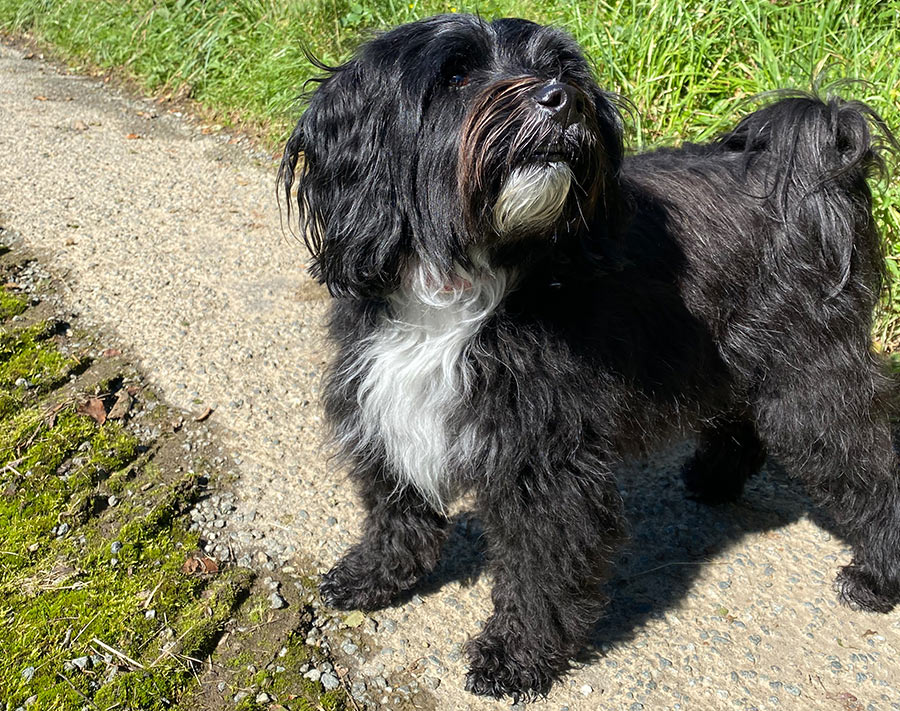 I have kept chickens all of my life, growing up we had over 40 chickens, 3 guinea fowl and 3 ducks on my parents little small holding. Years later, moving to our little cottage I knew I wanted to make sure I had room for chickens. I bought with me a little Pekin Cochin cross who was pretty feisty and had been a great mother in the past. I had always wanted to keep Buff Orpington's and knew they were fairly docile so when she went broody I knew that was my chance. Luckily I found some fertile eggs and she hatched a clutch of lovely hens. I had 7 good years with my Orpingtons but sadly only have one elderly lady left now.

So this time I decided to buy an incubator and have a go myself. I ordered a Brinsea automatic one and have just successfully hatched 4 chicks in November 2020. Three hatched first and you can see them below at only a few hours old. The final one to hatch was struggling to get out of her egg....

So we had to give her a bit of a hand. It was a tense time but she did it and survived! The photo below shows the elder three on the right and little Truffle sitting down on the left. She took a few extra hours to stand up and walk but she is a determined little chick! We believe at this point we have two girls - Fudge and Truffle and they are the dark brown ones. We know that we have one definite boy and we haven’t named him as we will re-home him. The other chick which was half brown and half white could be either a boy or a girl, so we have called 'her' Honey in hope that she is indeed a girl! 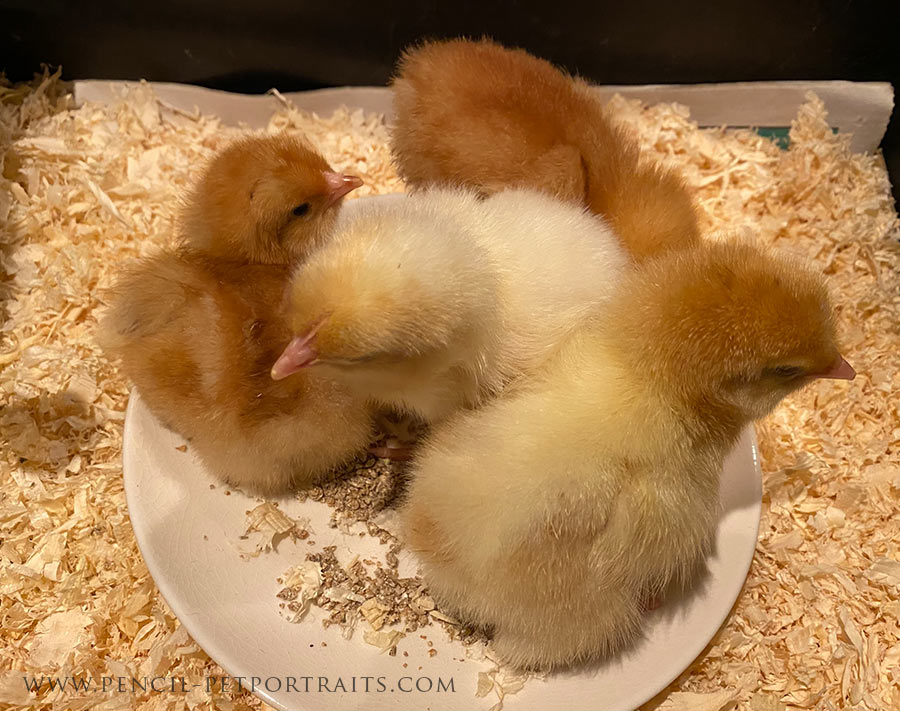 Truffle soon caught up though and this is a photo of Fudge and Truffle on my kitchen worktop.

They lived in our kitchen in a big cardboard box for the first two weeks and you can see in the photo below the heat lamp we have emulates the mother, the area is a warm dark place they can sleep and cuddle together, and as they grow you can raise the yellow legs to make it higher. They loved it. 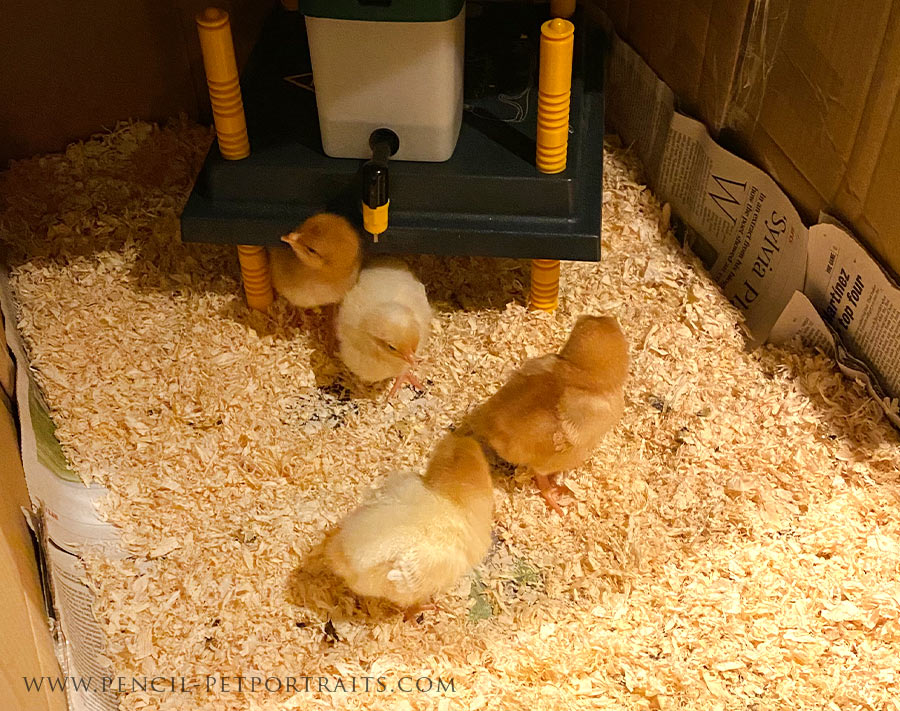 They seemed to grow even over night! I would come down in the morning to feed them and they would have more feathers every day. 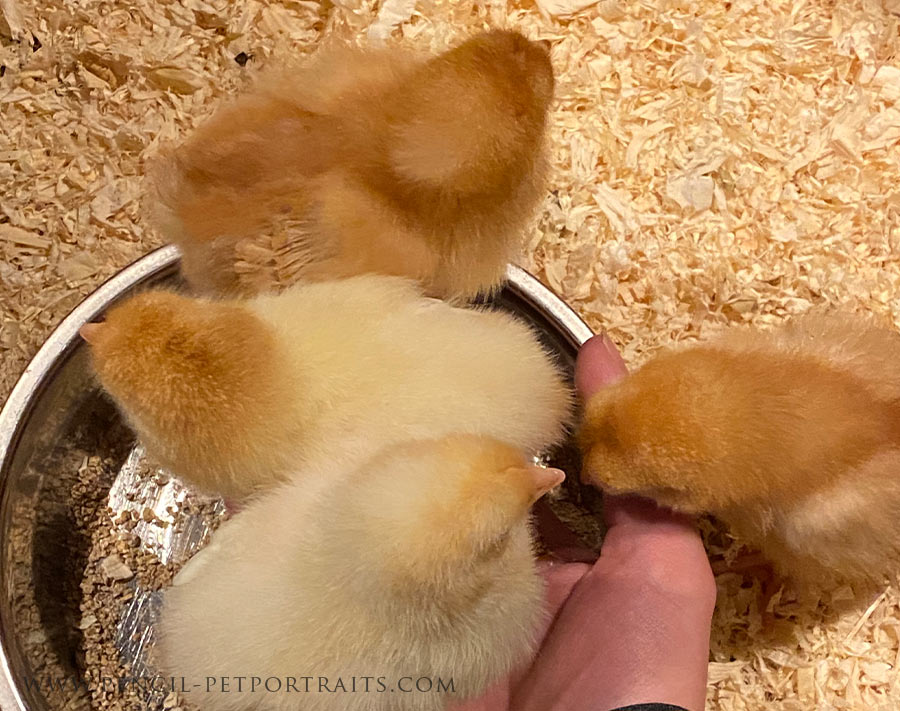 I even gave them a pea stick form the garden to practice sitting on for perching. It took a few days but they all managed it in the end. I think they enjoyed it as at one point a good game was to fly over it!

The next obvious step was to allow them to venture on the kitchen on the floor. They loved this although as mum I did have to keep clearing up 'deposits' for the 10 minutes they were out each time!!

Once they were fed up of the kitchen floor, on nice days I would let them just outside the back door. This one I call busy bottoms as it’s heads down scratching to see what they can find.

When they were nearly 4 weeks old they outgrew their box we moved them outside with their heat lamp for the cold nights. This photo was taken when they met their new house. They have everything they need in there from food, water, a cosy bed and they can go down a ramp to a larger area underneath to investigate.

We found that with the darker evenings, they needed light in their house so we strung up some fairly lights for them so that they could see.

Their little hen house glows in the dark evenings! So pretty!